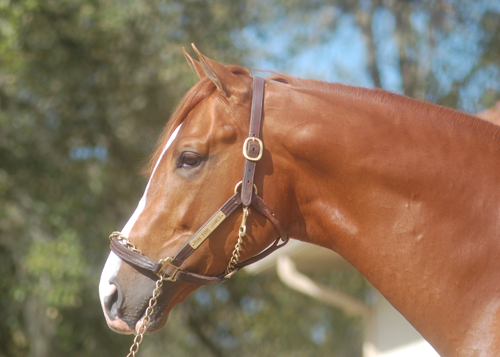 Several months ago we told you about Run for James, a then 2-year-old thoroughbred owned by two of our Directors, Alan Furst and Michael Harrison. As Alan and Michael admitted at the time, they generally have a hard time naming their racehorses, but not this one. “Knowing James, his spirit, his will to win and great athleticism, we thought ‘Run for James’ would be a perfect fit,” they said. 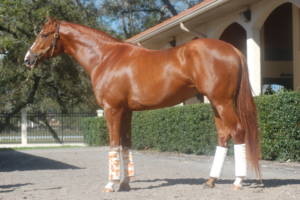 Well, after suffering a slight medical setback in Florida where he was in training, Run for James is now in great running shape and has just arrived at New York’s Aqueduct Racetrack to prep for his first start. According to Alan, he’s been “moving very well” in his new home in NYRA and will continue to extend his workouts to 4 and 5 furlongs over the next couple of weeks. Then his team is hoping to find a race for 3-year olds (Run’s had a recent birthday) that’s from 7 to 9 furlongs shortly thereafter.
Until then, his trainers are working with him diligently and are very pleased with the results so far. As Alan says, he’s big and strong and great looking, adding, “If it were a beauty contest, Run for James would surely be the top contender.” Check out the accompanying photos and see if you don’t agree.

As soon as we have a date for his first race, we will let you all know. Meanwhile, YOU can guarantee that Run for James’ first outing will be a huge success by joining our Run for James Winners Circle.

All you need to do is place a “bet” on the big chestnut colt of $25 or more through our donation form below. When you do you’ll win a handsome Run for James, leather-mounted, engraved brass nameplate like the one he’s wearing in the photo. It makes a great key chain, watch fob (I’m dating myself), luggage pull, or collectible. Better still, funds we receive will be used to bolster the James P. Koehler Memorial Scholarship, which provides tuition for needy student-athletes at St. Anthony High School in Jersey City. Last year in just a few months we managed to raise enough money to cover a single scholarship award. This year we’re aiming at increasing that number to 10. That may be a tall order but like Run for James, we think that pulling together we’re up to the challenge.