After a strong third place finish in the first race of his career, the Foundation’s “official” thoroughbred racer, Run for James blasted his way to a big win in just his second outing.

Run for James led wire-to-wire in the one mile contest at Parx Racetrack in Pennsylvania on June 5. With jockey Angel Arroyo in the saddle, RFJ broke out of the gate on top and never looked back, finishing about 6 lengths ahead of the field. 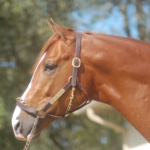 Trainer Steve Klesaris said that the future star ran a powerful race but is still “very green” and will only get better as he becomes more accustomed to the competitive environment, handling track conditions, and according to Steve, “learns to rate.”

Owner and Foundation Director, Alan Furst, summed up the feeling about Run for James perfectly, saying “He’s quite an athlete. Just like his namesake.”

If you haven’t joined the Run for James Winners Club, now’s the time to get on board. For your tax-deductible contribution of $25 or more you’ll receive a great brass and leather bridle nameplate key ring engraved with Run for James’ name. Better yet, we’ll apply the proceeds from your donation to the James P. Koehler Memorial Scholarship Fund, which helps needy student-athletes achieve a level of success in the classroom to match their efforts on the field.