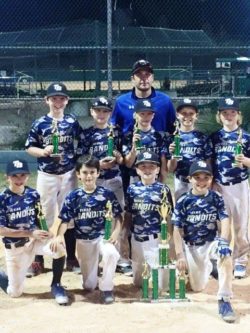 Most of us are familiar with the phrase, “Pay it Forward.” If not, it simply means that if something good happens to a person, he or she turns around and does something good in return. The cool thing about it is that instead of paying back the person who actually did you the kindness, your good deed or gesture gets passed forward to someone else. And in the best of worlds, that sets a chain of good deeds in motion.

That’s what’s happening in Houston, Texas where a team of 10-year-old baseball players are “playing” it forward.

About a year ago James Koehler, for whom our Foundation is named, was living and working in the Houston area and the Texas Bandits were one of several teams he was coaching. The boys were very young (8 and 9 year olds) with just a little experience, but plenty of energy, enthusiasm and a willingness to work and learn. James loved them.

The team did reasonably well against typically tough Texas competition but took about as many losses as they did victories in their first season together. They didn’t like the losses but would not be discouraged. James saw to that with a coaching style that relied on communication as much as it did practice sessions.

He spent entire afternoons just talking to the Bandits and impressing them with what he believed were the character essentials of winning baseball and winning in life: respect, positivity, teamwork, sportsmanship, mental toughness, self-confidence, good work ethic, gratitude. Of course hitting, fielding, throwing and running were all important, but improving those skills would be just part of the equation. It was the whole package that James knew would achieve the results he wanted both on and off the field. By the end of the season James and the team knew that great things were in store.

The Bandits took James’ passing hard, but they set out to honor his memory in ways that would make him proud. They dedicated the 2016 season to their coach, hanging his jersey in their dugout during games and wearing a patch with his initials on their uniform sleeves. And as predicted, on the field all of their hard work and coaching produced a string of early-season wins. In fact, the Bandits captured their first big tournament of the year and are ranked number one in the state for their age group.

More important, the team and its coaching staff are determined to take James’ example to heart and pay it forward on behalf of needy families in their area.

Here in our local communities there are lots of kids who would benefit from great coaching, great advice or just a shoulder to lean on, but who are missing out through no fault of their own. As part of our mission, the Play for James Foundation hopes to provide opportunities to many of them… and could use all the help we can get.

Maybe someone has done you a particular kindness in the past (or will in the future). No doubt you’ve offered your thanks, but have you paid it forward? Could be this is your chance.